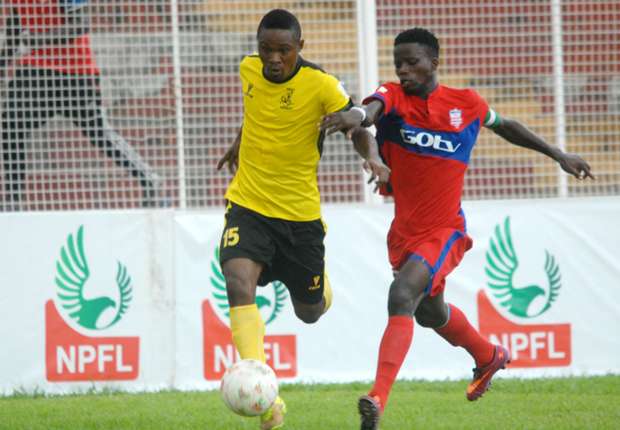 Ikorodu United forced visiting El-Kanemi Warriors of Maiduguri to a 1-1 draw in a Matchday 33 fixture of the Nigerian Professional Football League at the MKO Abiola Stadium, Abeokuta on Sunday.

Yemi Olasupo’s goal salvaged a point for Ikorodu United against El-Kanemi Warriors at the MKO Abiola Stadium on Sunday.

The draw means the Oga Boys remain 19th on the log with 23 points and 20 points behind Warriors.

The victory earned the Solid Miners their 16th maximum points of the 2016 season.

Rangers had two goals disallowed by the match referee in the keenly contested war in Makurdi.

Nasarawa United bowed down 1-0 to Plateau United thanks to a second half penalty strike by Benjamin Turba on Monday. Nothing apart from victory was therefore expected in the game and they didn’t disappoint.

Rangers came into the match prepared to stretch Nasarawa United but the very determined Lafia-based side ensured that the visitors returned to their base empty-handed.

Heartland FC were held to a 1-1 draw by Sunshine Stars in a top tier fixture at the Akure Township Stadium.

Chidiebere Ajoku opened the scoring in the second minute of injury time before Kehinde Adedipe equalised for the Owena Waves.

The score was a priceless one for the Naze Millionaires as they continue their battle against relegation.

Most of the play was concentrated in the middle of the park with both teams struggling to find a way past the opposition’s defensive line.

Stars ended the first half the stronger of the two sides with a flurry of chances.

The bad reaction of Akure fans marred the intriguing battle that produced two goals in a late show.

Ajoku shocked the jam-packed home fans with his finish past a helpless David Ariyo.

The Pride of Rivers accounted for the scalp of Plateau United at the Yakubu Gowon Stadium to go joint-top of the table with Wikki Tourists after the completion of week 33 matches.

It was triple tragedy for Lobi Stars as they lost 2-0 at the Confluence Stadium to Niger Tornadoes.

Their continental dreams suffered a blip, coach Evans Ogenyi was sent to the stands and top striker Kingsley Eduwo was red carded for dissent.

Tornadoes, who were more comfortable at the match venue, went ahead under five minutes when forward Kunle Isa met a long thrust before unleashing a thunderous teaser which struck the bar before landing in the net.

15 minutes after the break. Solomon Owello doubled the lead from the penalty spot.

The result pushed FC Ifeanyi Ubah to 3rd in the table with 52 points.

Wikki Tourists remain at the summit of table with 53 points, the same with Rivers United, though they have better goal difference than the Pride of Rivers.

Ifegwu Ojukwu, running in and shaking off the challenge from Pillars central defender, Jamiu Alimi, to draw the first blood in the 9th minute.

Ajani Ibrahim scored the second goal  to make life more difficult for the visitors before the break.

In the second half, Shooting Stars immediately resumed the mauling with Adetunji Sunday scoring from a goal mouth situation and celebrated with Salsa steps to the delight of the home supporters.

Adetunji Sunday also made matter worst for Kano Pillars when he rounded goalkeeper Yusuf Mohammed and kicked towards empty goal but Jonathan Zikiye made a goalline clearance. Still hungry for more, Adetunji popped up again and delivered his brace in the 64th minute to completely deflate Kano Pillars.