A prominent Afghan journalist and political adviser has been gunned down in Kabul, just days after she warned on social media that she feared for her life.

Mina Mangal, who worked as a television presenter before entering politics, was shot dead at close range in Kabul on Saturday.

Nasrat Rahimi, a spokesman for the interior ministry, said one or possibly more assailants had escaped the scene but no one has immediately claimed responsibility for the attack and police say it is not yet clear whether the murder was a terror attack or an attack from someone Ms Mangal knew.

In a tearful video posted to Twitter, Mangal’s mother named a group of men as suspected killers, claiming they had previously kidnapped her daughter. The group were arrested for that abduction, she said, but later bribed their way out of detention.

Ms Mangal had recently posted on Facebook that she had received threats and feared for her life, prominent women’s rights activist Wazhma Frogh said on Twitter. 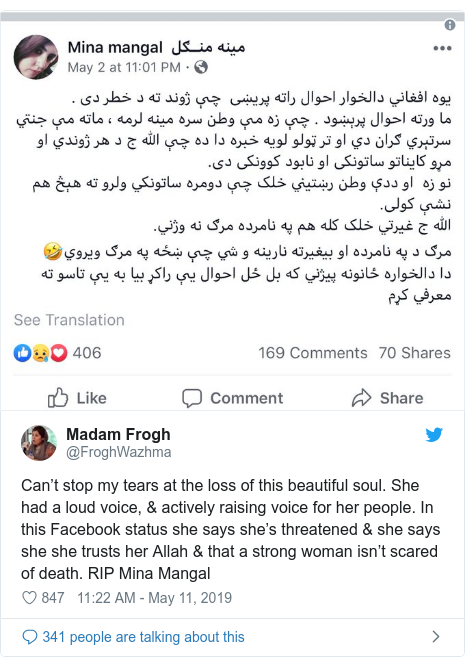 Women’s rights activists have expressed grief and anger that Ms Mangal was not better protected by authorities despite making her fears clear.

“This woman had already shared that her life was in danger. Why did nothing happen? We need answers,” Wazhma Frogh, an Afghan human rights lawyer and women’s rights campaigner said in a post on Twitter. Frogh said Ms Mangal had recently posted on Facebook that she feared for her life and was receiving threats.

“Why is it so easy in this society [for men] to keep killing women they disagree with?”

Police are continuing their investigation into the murder and have not identified any suspects.

Presidential Inauguration To Hold On May 29, Not June 12, Says Presidency

Donald Trump Reveals What He Has in Common With Former United State President,…

Trump Says US Is ‘Ending’ Relationship With WHO

Wuhan To Test Entire Population After Fresh Cases Of…