Man Caught And Killed For Stealing A Motorcycle

A young man believed to be in his mid 20s or early 30s was caught by security vigilante and community youths today, for allegedly stealing motorcycle and blinding the victim.

According to Abia Facts Newspaper, the young man and his accomplice, who is still on the run, picked a commercial motorcycle rider from Okigwe to Isuikwuato via Ezinachi road to Ndi Ubi farm settlement where they brutally beat the owner of the bike and whisked away with the motorcycle, leaving their victim blind.

“A man saw them while they were taking off with the bike and called for reinforcement. The villages and vigilante now laid siege, on sighting the villagers, the thieves abandoned the bike and ran into the bush. Unluckily for the apprehended one, he strolled into the trap of the vigilantes who were still waiting all night for them to come out of the bush this morning. We gathered that this apprehended thief has already been killed and burnt by Okigwe people who came to Isuikwuato and picked him up.” 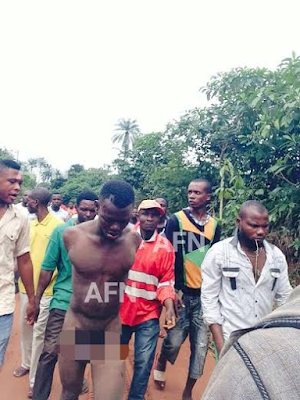 Executive Online Content Manager @Yawnaijaentertainment.
I'm a good team player,an intellect and an innovative personality with a good grasp of knowledge in online content creation,digital marketing,blogging,public speaking,creative writing and so on
I love networking,surfing the internet,working-out,sprinting,praying,solving complex issues,interacting with like minded intellectuals and travelling

My Landlord Is In Big Soup