Burna Boy’s Performance, The Most Shazam-ed At Global Citizen’s ‘Together At Home’ Concert

Artists from all parts of the world teamed up with Global Citizen to present the “One World: Together At Home” virtual concert series. Millions of viewers discovered new songs as they took to the Shazam app to identify the songs and artists.

Nigerian Afrobeats singer, Burna Boy’s songs, ‘African giant’, and ‘Hallelujah’ were part of the searches which resulted in being the most-shazam-ed songs of the concert, currently standing at fourteen thousand four hundred and ninety-nine (14,499) shazams.

The 28-year-old Atlantic recording artist performed his mega-hit “African Giant” off his 2019 album of the same name, which has gotten him massive global recognition and a Grammy nomination. He also took us back through the years when he ran through his 2017 track titled “Hallelujah.”

With a reawakening of the Burna Boy sound, his album ‘African Giant’ is back on the charts with traction in the United Kingdom, Europe, Canada, and the United States. 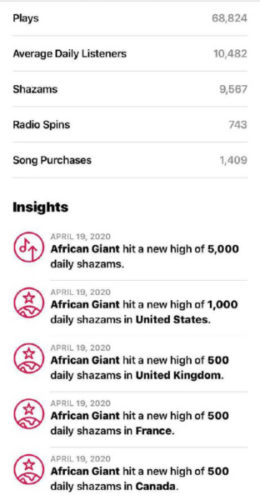 Jesse Jagz Set to Release New Album, on May 29